How to Keep Your Zoom Meetings Secure

Zoom has quickly become a standard part of the business day. With millions of employees displaced from offices and working from home, companies have turned to Zoom as a videoconferencing solution.
Schedule A Free IT Services Consultation

Zoom has quickly become a standard part of the business day. With millions of employees displaced from offices and working from home, companies have turned to Zoom as a videoconferencing solution. Zoom meetings, with Brady Bunch-like grids of participants, are increasingly common. 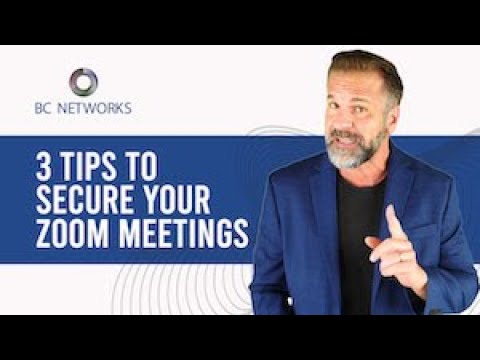 As Zoom has become a prevalent part of the workday for many workers, it’s also become the target of hackers and others who are disrupting meetings and school gatherings. Fortunately, there are security settings within the software app itself that can keep your Zoom gatherings protected.

How Are Zoom Meetings Being Attacked?

Zoom is a videoconferencing platform that allows for informal meetings, lectures, classes, webinars and large gatherings. In late April, company founder and CEO Eric Yuan announced the app had hit 300 million daily users, up from 200 million in March. Those numbers are staggering, given that Zoom saw peak daily usage of 10 million in 2019.

The company has had to scramble recently to address many security and privacy issues identified since the app’s use jumped. Many of these security lapses resulted in the “zoombombing” phenomenon, wherein unwanted participants disrupted Zoom calls with music, pornography or inappropriate comments.

Zoombombing may be considered disruptive only. However, it carries potential security risks if someone infiltrates a meeting where participants share and discuss proprietary or private information. Hackers could easily capture this information and steal sensitive data.

What Is Zoom Doing to Protect Online Meetings?

In the past several months, Zoom has responded to the security and privacy issues with several steps:

How Can We Keep Zoom Meetings Secure?

While these safeguards are intended to secure Zoom at the source, businesses can take steps to protect their users and information. Here are some helpful Zoom usage tips:

BC Networks is here to help you with your technology and cybersecurity needs, especially with remote work tools, during these challenging times. To learn more about our comprehensive technology services, contact us today.