Using OneNote on a Tablet: Surface Pro vs the iPad Pro

OneNote is a free application from Microsoft that allows you to collect notes in a variety of formats – handwritten text, typed text, digital drawings, photographs, links, screenshots, videos, and audio files – and organize them, share them, and use them to create other documents. OneNote is an excellent app whether you take notes in […]

OneNote is a free application from Microsoft that allows you to collect notes in a variety of formats – handwritten text, typed text, digital drawings, photographs, links, screenshots, videos, and audio files – and organize them, share them, and use them to create other documents. OneNote is an excellent app whether you take notes in a classroom, convention hall, or business meeting. However, the usefulness of OneNote is greatly increased when you use a tablet with it. The two top competitors on the market today are the Surface Pro and the iPad Pro, and both are compatible with OneNote.

OneNote on a Surface Pro

One of the benefits of the app is the ability to easily add pictures to your notes using the Surface Pro’s camera. Just keep in mind that the photo quality may not be very good, especially in conditions with little light. The iPad Pro offers a much better picture-taking (and editing) experience compared to the Surface Pro.

On a Surface Pro, the typical battery life is about 7 hours, which could leave someone looking for an outlet near the end of the workday even if they charged it the night before. However, the battery life is considered an improvement over the previous versions of the Surface tablet.

One of the key benefits of the Surface Pro is its physical, tactile keyboard a part of the cover. The Surface Pro does need to be docked in order to use the keyboard, but it is an option that isn’t available with an iPad Pro. Note that the keyboard can be tilted at a slight angle when used. These features would be very important to someone who plans to type their notes into OneNote rather than write them.

The ability to lay the Surface Pro screen almost flat while it is still attached to the keyboard works extremely well for adding handwritten notations to something you are working on in OneNote. Of course, the screen can be completely detached from the keyboard when needed.

Note that one of the commands available on the Surface Pro tablet that isn’t available on the iPad Pro is the Add/Remove Space command located on the Insert tab. This makes the process of rearranging the content in your notes very easy.

OneNote on an iPad Pro

Compared to the Surface Pro, the iPad Pro is both lighter and thinner, making it easier to carry around, more mobile, and easier to hold for notetaking. This can be a major benefit for those who have to spend extended time taking notes without the convenience of a desk or table. The battery life of an iPad Pro averages about 15 hours, almost twice that of the Surface Pro. This is great for users who often struggle to find an outlet to charge their device.

One of the outstanding features of the iPad Pro is the Apple Pencil. The Apple Pencil glides very smoothly and is better at capturing handwriting when compared to the Microsoft Surface Stylus, which is a great bonus for OneNote users that depend on handwritten notes. It also has a solid tip, unlike the soft tip of the Surface Stylus. The size of the tip is also slightly larger on the Pencil.

Another plus of the Apple Pencil is that you don’t have to switch tabs to erase something. Rather, you can simply flip the Pencil over and use its eraser. The lasso tool can also be turned on instantly by using the magnetic button on the Pencil.

Unlike the Surface Pro, the iPad Pro allows you to take very high-quality photos even in low-light conditions. You can then easily add them to your OneNote document, as well as zoom, crop, and focus them. This is very useful for capturing content-heavy slides during a presentation or extensive notes someone has written on a whiteboard. Also remember that the Add/Remove Space command is not available for the iPad Pro, and this can make it difficult to rearrange content you have added to your notes. 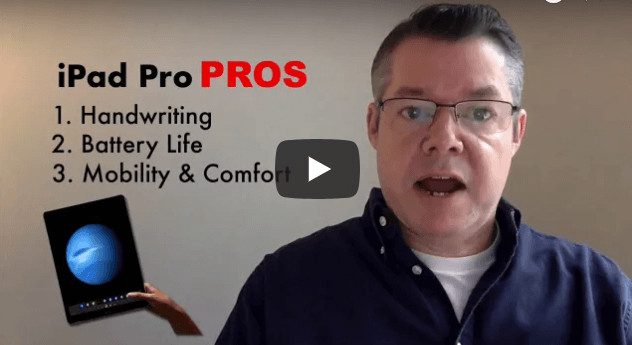 Both the Surface Pro and the iPad Pro work extremely well with the OneNote app, but only the Surface Pro can be used with the full-fledged desktop version of OneNote (aka, OneNote 2016). The Surface Pro offers the Add/Remove space command, a tactile keyboard, and the ability to easily switch between typing in notes and writing notes. The iPad Pro, on the other hand, offers a much better writing experience when the Apple Pencil is used and the Pencil offers more functionality for things like erasing text and lassoing content. Both tablets, however, are ideal for notetaking.

Search the I.T. and Business News You Need Archives.